World Wetlands Day: webinar “Conservation of aquatic ecosystems, territorial planning and involvement: a strategy for the protection of biodiversity” 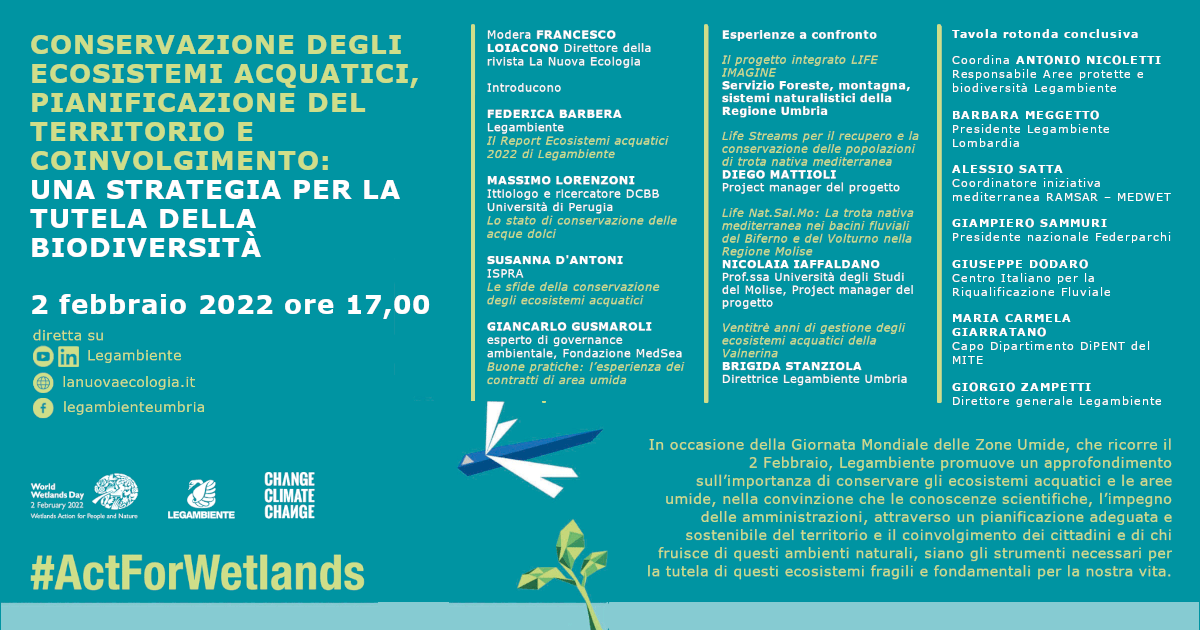 “Enhance, Manage, Restore, Love wetlands”: this is the slogan launched by the 2022 global campaign, on the occasion of World Wetlands Day. An anniversary that is celebrated on February 2 to commemorate the anniversary of the “Convention on wetlands of international importance”, signed in Ramsar (Iran) in 1971 and signed up to now by 170 countries, which includes a list of approximately 2,435 areas of international strategic importance , 66 in Italy.

The protection and enhancement of wetlands represents a constant commitment for our project partner Legambiente who, on the occasion of this important world day, presents the Report on Aquatic Ecosystems with a map of 15 best practices, citing a series of successful projects , Including LIFE STREAMS, in the management of humid environments and aquatic ecosystems throughout the Peninsula.

From the protection of the Mediterranean trout, to the otter visitor center in the Gran Paradiso National Park, to the monitoring of the pink flamingo in the Gran Sasso National Park, to the census in Sicily of the wetlands of the Mediterranean islands: good practices that remind us of the same time the importance of marshy areas, marshes, bogs and natural or artificial water areas, permanent or transitory, including sea water areas (less than 6 meters deep).

Ecosystems with a very high degree of biodiversity that welcome and conserve a rich biological multitude of plants, birds, mammals, reptiles, amphibians, fish and invertebrates and significant for the achievement of the European and world objectives by 2030 in the stabilization of greenhouse gas emissions and mitigation the impacts of climate change. There are many appointments organized in the Peninsula by Legambiente: among all we remember today’s online meeting, starting at 5 pm, entitled “Conservation of aquatic ecosystems, territorial planning and involvement: a strategy for the protection of biodiversity”, in which presented the Report on Aquatic Ecosystems 2022.

Among the fifteen most virtuous examples in the protection of aquatic biodiversity and wetlands there are also the LIFE STREAMS project and the LIFE Nat.Sal.Mo.

Data on wetlands: In general, Italy preserves one of the richest heritage of biodiversity in Europe, with about 37% of the total Euro-Mediterranean fauna and a flora consisting of over 6,700 species of vascular plants. Wealth endangered by phenomena such as widespread pollution, urbanization, intensive agriculture, over-exploitation of resources, the growing impacts of invasive alien species and climate change which, according to the UN, has already had an impact global negative on 47% of land mammals and 23% of birds. According to IPBES (Intergovernmental Platform on Biodiversity and Ecosystem Services), biodiversity loss continues at an alarming rate in Europe: 39% of wild bird species assessments and 63% of other protected species assessments are in poor condition or negative, while only 15% of the assessments of protected habitats show good conservation status. According to data from the first European Red List of Habitats, out of 490 habitats (terrestrial and marine) cataloged in 35 European countries, over a third of terrestrial habitats are currently in danger of disappearing.

Previous Post
Breeding activities also started at the National Park of the Casentinesi Forests, Monte Falterona and Campigna
Next Post
Nesting at PMagra