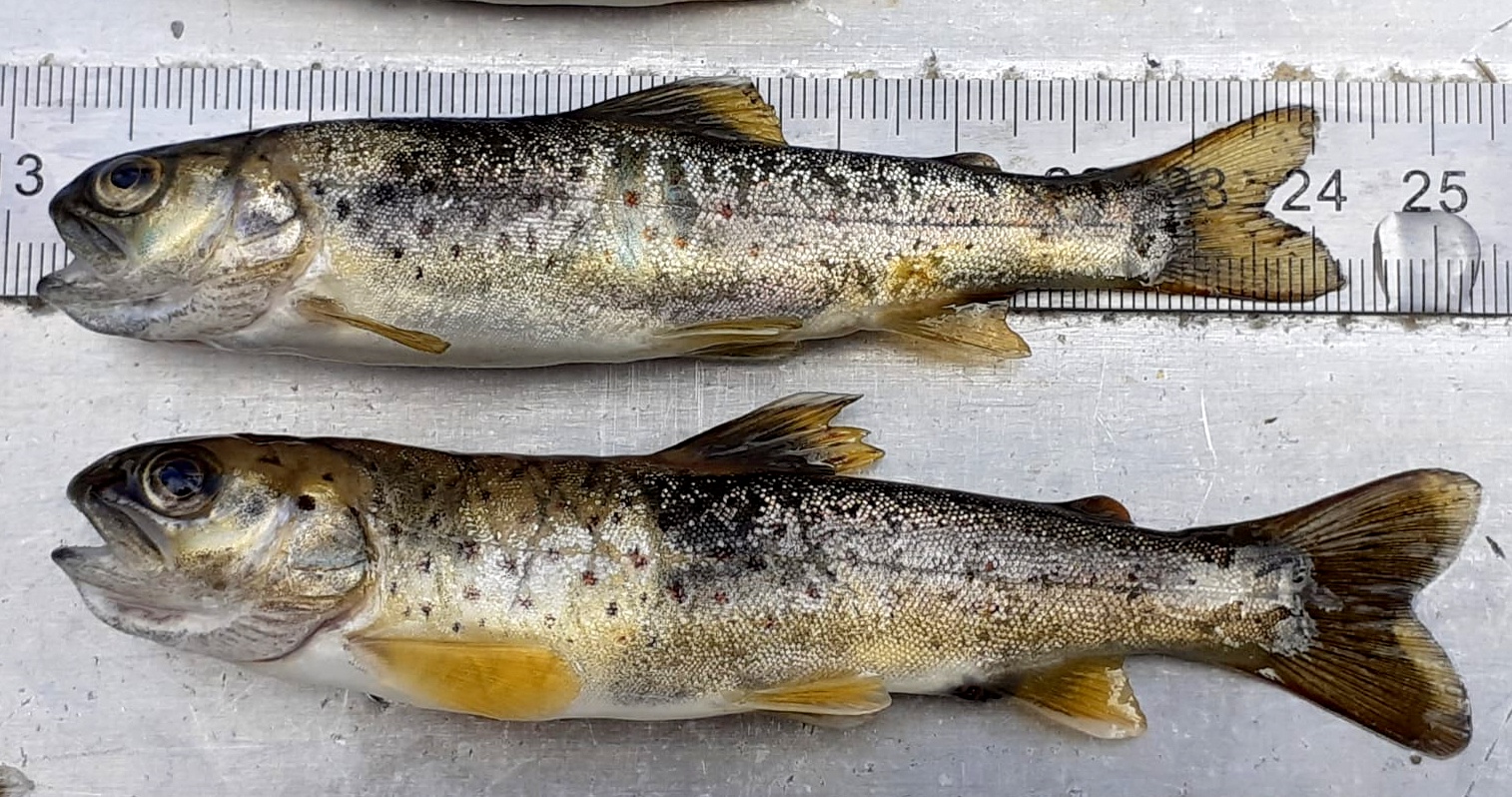 We fully republish the news that appeared on https://www.sardegnaforeste.it/ on January 14, 2022

On 11 January, an activity planned for the protection of the Sardinian trout was carried out on Rio Flumineddu, between the territories of Orgosolo and Urzulei, also carried out in the so-called “genetic refuges” of the species, by the FORESTAS Agency, by the Department of Life and Environmental Sciences of the University of Cagliari, AGRIS Agency, Service for the protection of Nature and Forestry Policies of the Department of Defense of the Environment, CFVA and Fisheries and Aquaculture Service of the Department of Agriculture.

The activity is part of the project underway for some years, aimed at the implementation of knowledge on the pure residual populations of this important species, their monitoring and conservation. In particular, the objective of the day was to proceed with the collection of genetic material (seminal fluid) to be preserved for the creation of a semen cryobank, to support the conservation interventions of the species.

Once on the site, the regional operators (teachers, researchers and technicians of the three bodies) prepared the necessary equipment and installed the base camp for sampling, began the patrol of the watercourse, unfortunately finding a series of dead Sardinian trout.

Upon initial examination, they showed damage and abrasions similar to those resulting from the use of a very dense mesh fishing net, an assessment subsequently confirmed by the report carried out by the Zooprophylactic Institute of Sassari.

A VERY SERIOUS DAMAGE FROM POACHING, CARRIED OUT IN THE WORST WAY

As the monitoring of the pools proceeded, the discovery of very few living individuals revealed the very serious impoverishment of the population, which instead was particularly abundant and well structured at the time of the last monitoring, in early autumn.

This is a particularly serious event, not only because the almost total absence of adult individuals did not allow the collection of genetic material (foreseen with the “squeezing” technique, to guarantee the study and conservation of the population) but also because the Poaching activities were carried out in the worst possible way, with the use of a particularly tight mesh net which acted in an absolutely non-selective way, leaving no escape even for the youngest individuals.

This raid, precisely in the winter period – while the species is reproducing – seriously jeopardizes the future of this population, which is particularly important since it is one of the few that have also been preserved in nature at the regional level (and for this reason protected by a specific council decree which prohibits, from 2019, fishing in the mountain stretch of Rio Flumineddu).

INVESTIGATIONS BY THE FORESTRY CORPS

The territorial managers of the CFVA were also promptly informed of the findings, with the usual spirit of collaboration for the protection of Nature. The activities of judicial competence were promptly activated.

This sad episode draws attention on the one hand to the richness and importance of regional biodiversity and on the other to its fragility and exposure to threats of various kinds, most of which are unfortunately attributable to actions carried out by man more or less. aware.

It is increasingly important to know, monitor and manage the regional natural heritage, implementing, as in this case, all the possible synergies between the persons in charge and the stakeholders for its protection, informing, communicating and sensitizing citizens as much as possible, so that events of this kind do not happen again.

Link to the original article:

Previous Post
Two days of networking for the LIFE STREAMS project
Next Post
Parco Magra: the activities of the first STREAMS breeding season are still in progress